I am excited about a few things coming up this spring and summer. First of all, I’ll be playing at a boarding-house meal at the Earthworks Market on Jefferson in Plymouth, 4-7pm, on St. Patrick’s Day, Monday March 17. Get tickets at the market for one of three seatings.

The other day I got to perform Malcolm Dalglish’s arrangement of Quil O’Quay with the Eisenhower Choir (October 2013). Take a listen:

I had such a good time at my concert last weekend.

This year we held it at our church, which we have been attending for just over a year, and in which we will be confirmed early in November.

It’s a beautiful old building with white walls and dark wood pews and arched ceiling, stained glass windows mostly in deep blue and red, a beautiful beautiful old wooden altar against the front wall, and a fairly wide raised place (the choir) between the rows of pews (the nave) and the altar area (the sanctuary). On one side of the choir is the upright piano, the beautiful pipe organ, and the pulpit. On the other side are rows of pews for the choir singers. At the front of the choir, all the way across the church, is a wooden rood screen — narrow columns supporting a beam on which stands a crucifix.

I set the dulcimer at an angle at the center front of the choir, so that most folks in the audience would be able to see the strings and hammers as I played. At the bottom of the steps I set the two chairs and guitars. My recorder balanced between the top rail of the dulcimer and the music stand that attaches to that rail.

Music included many originals; other pieces dedicated to friends, colleagues, places, and events, beginning with my first introduction to the dulcimer; three original songs with guitar; and one song in Spanish. For a few months now I have been helping Armando lead worship in our Latino mass. I am slowly learning Spanish with the help of the online program Mango through the library at Mark’s school. I can understand all of the liturgy, most of the songs and the Scripture readings, and some words and phrases in the sermons. My pronunciation is pretty good, but there’s not much I can say with any confidence. Anyway, I chose one of the many beautiful songs we do in that service and asked Armando to play and sing with me in the concert. He is from Honduras, and his voice is amazingly deep and intense, and I love how we sound together in the soaring first line of the chorus.

My in-laws came up for the performance, several good friends attended, the choir director from Crown Point who hired me for a Malcolm Dalglish piece (that concert this week!), and also some folks who saw flyers. There were twenty-five or so, which is a good crowd for one of these concerts; last year I think I might have had five! And nearly everyone stayed for a long time at the reception and seemed to have a good time. Several folks had very nice things to say about the whole show and / or about particular pieces.

Speaking of the reception, what a blessing it was for Barb to take charge of things, with the help of Roscinda and Anne. We had wine, cookies, fruit salad, cheese and crackers, chips and salsa, and my sad soupy attempt at a stirred custard with coconut and strawberries.

This Saturday, October 5, I look forward to celebrating thirteen years of hammered dulcimer playing. The concert will take place at St. Thomas Episcopal Church in Plymouth, at 7pm, with refreshments following. Music will include original, traditional, and classical tunes as well as a few songs with guitar.

And here is the choir of St. Thomas Episcopal Church practicing the Sanctus and Agnus Dei I composed for Father John in honor of his retirement.

Sanctus again, the same take made faster without changing the pitch:

I borrowed a friend’s condenser mic to record our church choir’s practice tomorrow. This evening I experimented with it to figure out how to connect it to my mixer and thence to the computer.

Here’s “My shepherd will supply my need” — tried two different reverb effects on the same take.

And here is an original, “This is the day.”

On Sunday afternoon, November 4, a small bunch of us gathered to celebrate my twelfth dulcimer anniversary with a little concert. 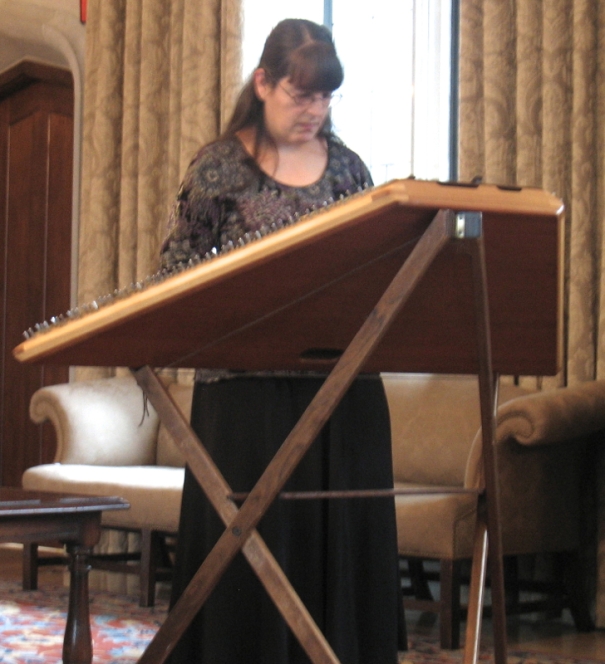 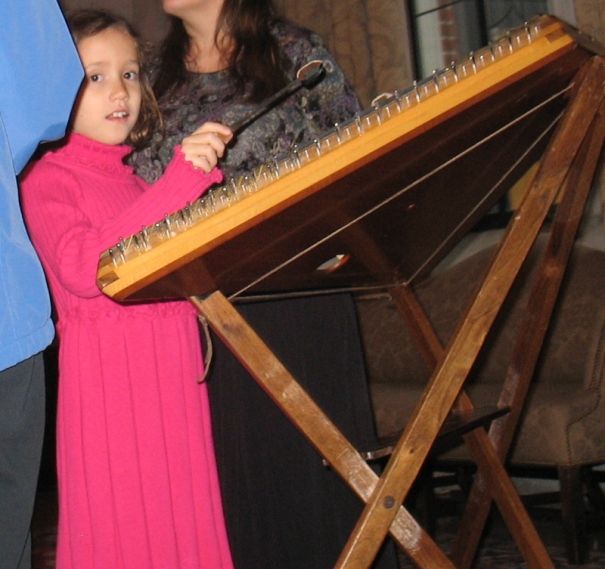 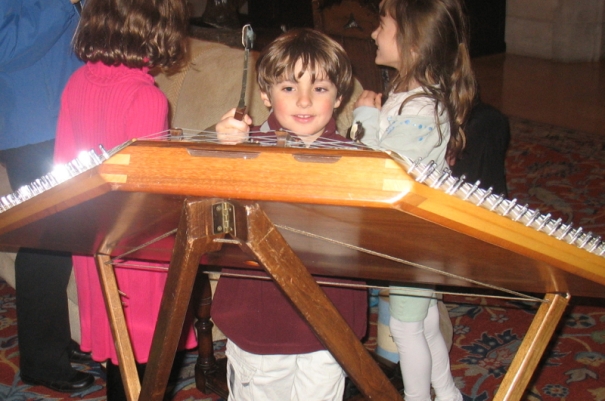 John Sherck got the whole thing on video:

On a whim, thanks to an email reminder, I decided to go to the Gebhard Woods Dulcimer Festival this weekend, at the state park in Morris, IL.

At this Saturday-Sunday festival, workshops and concerts run all day from 10am to 6pm. There’s always someone performing at the main tent, sometimes someone at the new talent tent, and — simultaneously — workshops conducted at five perimeter locations. A string of vendors lines the edge of the field by the parking lot, too.

I had an early slot in the new talent tent. I played Easter Thursday, a Bach prelude and Jesu Joy of Man’s Desiring, a trio of Scandinavian walking tunes, my original jig set Irksome Girl / Midnight Maze, What Child Is This? / Menuet (Quantz), an original meandering arpeggio-based tune Winter East and Kensington, and an upbeat rhythmic original Third Street Market. One fellow listened for the whole set; he was performing right after me. Three different people manned the soundboard in succession. And occasionally — during the faster numbers, a few other folks wandered in to listen a while.

After my set, I grabbed some lunch (provided by a Boy Scout Troop), then stayed to listen to the other fellow for a while before wandering toward the site of my first workshop — West African Improvisation with Max ZT. There was so much to say about this topic that we didn’t play a whole lot, but it was interesting stuff. At this point, though, it’s getting mixed up in my mind with the stuff from Max’s workshop this morning on Indian music.

In the evening the old time dance was held at a nearby school. We kept trying for a square, but never had the right number of couples. So we did several circle dances, one contra, the Virginia Reel, and the Texas Star. Great fun — I haven’t done this sort of dancing since we lived in upstate NY. I know there’s a contra dance in Goshen, about an hour away; might have to look into going once in a while.

This morning started with Max’s Indian workshop, in which we learned a little about what a raga is and explored one a tiny little very interesting bit. At the next site over I took Luke Notary‘s second workshop on polyrhythms, in which he sat on his box drum with an African shell shaker thingy strapped to his leg and led us in one groove after another. I especially want to remember and play around more with the one in six (accents on 1, 2, 4, 5, 1, 5) and the reduction in three (1… 2… 3… 1.. 2.. 3.. 1. 2. 3. 1231231231). Back to Max for his workshop on developing speed — through some seventh chord patterns, travis patterns with melody bits over top, and buzz / long rolls with one hand while the other hand plays a melody or bass line or something.

There weren’t any other workshops I wanted to take, but I stuck around to hear Lisa Ferguson play — while waiting for her set I had lunch, wandered around, heard Max’s band’s set (loud, intriguing, obviously highly skilled, a little more improvisational music than I would normally listen to in an hour). It was super hot, and it was very hard to sit still, but there wasn’t much else I wanted to do. I did manage to stay put long enough to hear some of Lisa’s set, which was rhythmic and interesting. Then a friend who’d just gotten in wanted to hear me a little, so we found a quiet spot and I ran through some of my new talent stage set. That was it for me — Mark and daughter picked me up and we headed home.