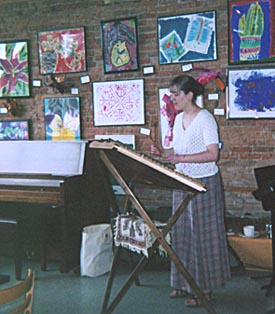 This weekend festival in Hamilton, NY, features mostly classical music but also a variety of other musical acts plus a dessert contest. My official performance was a morning show at the Barge Canal coffeehouse; after lunch I also played some on the Village Green. In the afternoon I headed over to Susan Nolen’s home for dinner and a jam session — we had a fiddle and three hammered dulcimers (including a new Nick Blanton… mmmm) and thoroughly enjoyed ourselves. 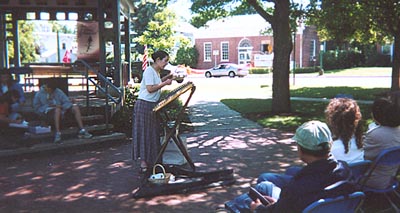 In July, I attended the Cranberry Dulcimer Gathering in Binghamton. This festival features workshops, concerts, jams, and sales for hammered dulcimer, mountain dulcimer, and autoharp. I taught two classes, one on modes and one on weddings, and I also got to take classes, including Cliff Cole’s “Special Effects” and “Singing With Dulcimer,” Bob Wey’s “Playing With Your Blocks,” Deb Justice’s “Irish Tunes,” Rick Fogel’s “Playing From The Heart,” and Donna Missigman’s “Waltzes,” shown in the picture. This was a great festival. It was so cool to meet various people: Curt Osgood, who also recorded at Wilburland; Cliff Cole, who reminds me of Tim Seaman; Deb Justice, a fellow William and Mary alum; Bob Wey, who helped me decide to get a strobe tuner; Sam Edelston, who does some really interesting things on the dulcimer; Marya Katz, who also plays a Jerry Read Smith dulcimer…

When Trim the Velvet lost Harry Lawless, we found Craig Higgins and became The Hanshaw Trio. Here we are at the Ithaca Farmers Market on a late August Saturday. The mostly Celtic ensemble includes Jerry Drumheller (fiddle), Craig (guitar and mandolin), and myself (dulcimer). 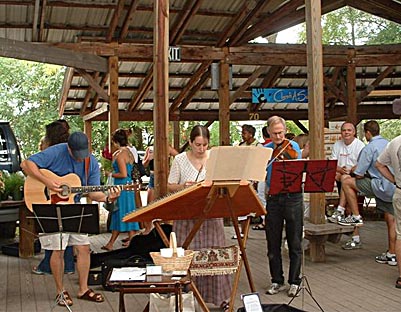 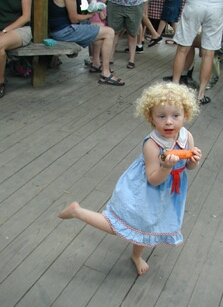